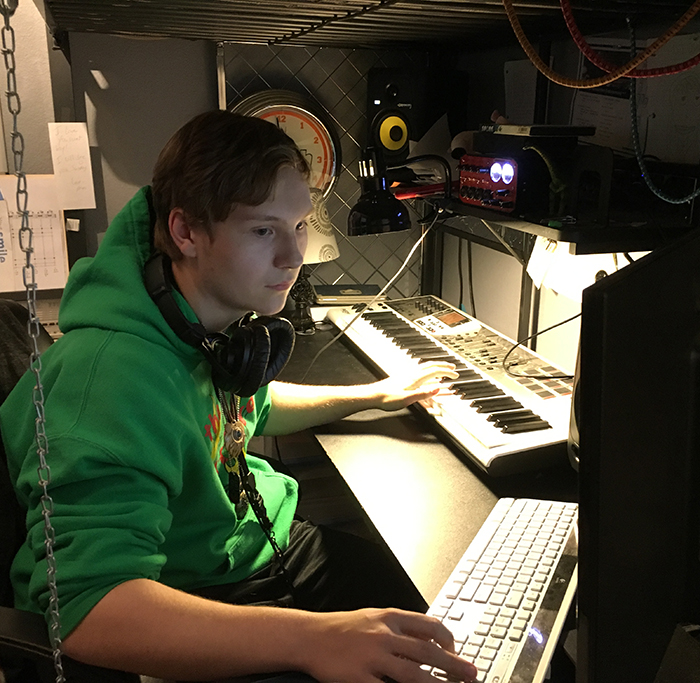 In between questions, he tapped his fingers against his leg that is casually crossed over his knee. He hummed a tune, unlike the one we heard playing in the neighboring band room. “I can’t tell you how many times I have heard this tune. They have been working on this for a couple of months now,” said sophomore Harrison Collins. To be in the mind of an aspiring composer, you have to understand how it works. Does the ambient noise help create original musical scores? “Sometimes that is how it works,” he said. “I always hear music in my head. I am constantly thinking of music ideas and it will play over and over until I can get it down on paper.”The 16 year-old student at Little Elm High School is a one-of-a-kind student, but remains humble around his friends in the wake of his latest accomplishment. Collins learned the week of Spring Break he was the first place winner in the Sam Houston State University’s Carson Thomas Miller Texas Emerging Composers Competition. “That is quite a mouthful,” he wrote in a social media post announcing his win! His piece, titled Ecstatic Noise, was composed in half a month and was specifically written for this contest. “I had to write the music for a small group of eight maximum instruments. Mine is for flute, bass clarinet, bass trumpet, French horn, trombone, piano, and timpani,” he said. Most composers take months to create an original musical piece, but Collins said he had a deadline to meet. Celestino Sosa, LEHS assistant band director told him about the contest in mid-November, but the catch was it had a December deadline. “I spent a lot of time trying to write down ideas but struggled. I didn’t think I would make the deadline.” He found help and inspiration in one of his favorite composers, Jonathan Newman. Newman’s Avenue X was inspired from his childhood experiences riding the New York subway. “There is a measure in the piece where the notes get loud and big. The description <Newman> used was ecstatic noise. I started writing and it just seemed to flow pretty easy from there and I made the deadline,” said Collins.Composers are self-made 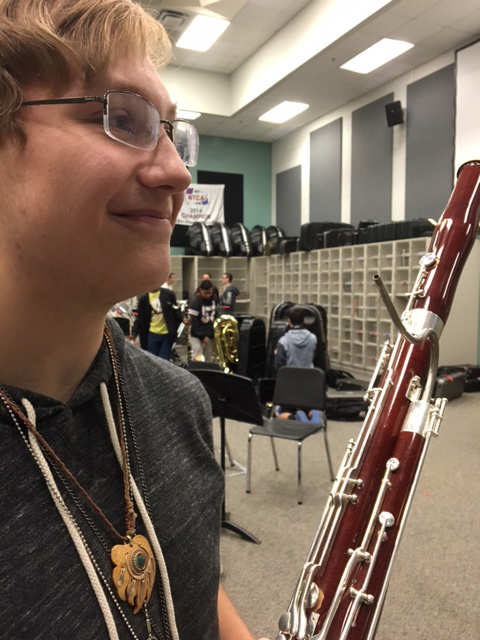 Formal composition training is usually found at a college where musical performance is part of the post-secondary study. Finding a teenager who is writing musical scores on a college level is few and far between. “Harrison creates music all on his own. We do not help him,” said Frank Felice, LEHS director of bands. “We teach students composition skills, but really some of the greatest composers don’t have formal training. They use their ears and write what they like.” Felice, who holds a bachelor and master’s degree in music, has seen his students advance and do well as a result of being a member of the Lobo band. He said Collins is achieving things that are outside the normal for a sophomore in high school. “It is exciting when you have student who is getting his music published. In fact, I was in Pender's Music in Denton not long ago and was looking for solo ensemble pieces and I found something on the shelf written by Harrison. That was really neat to find.”Collins has been writing music since he was in eighth grade. He has completed four pieces to include a published piece. He receives royalty checks in the mail since his piece has been purchased more than 30 times. He has submitted a second piece for publication and is waiting to hear back from Grand Mesa Music Publishers. Collins uses Sibelius, a notation software, to write his music. He creates music in his bedroom where he has set up a make-shift music lab to include his computer and instruments. Collins plays the bassoon, bass clarinet, and knows how to play the piano.A perk of winning first place, is to hear his musical score performed live at the 50thSam Houston State University Contemporary Music Festival.  Collins and his family will be traveling to attend the event.  To listen to his winning piece, click Ecstatic Noise.
Copyright © 2002-2022 Blackboard, Inc. All rights reserved.